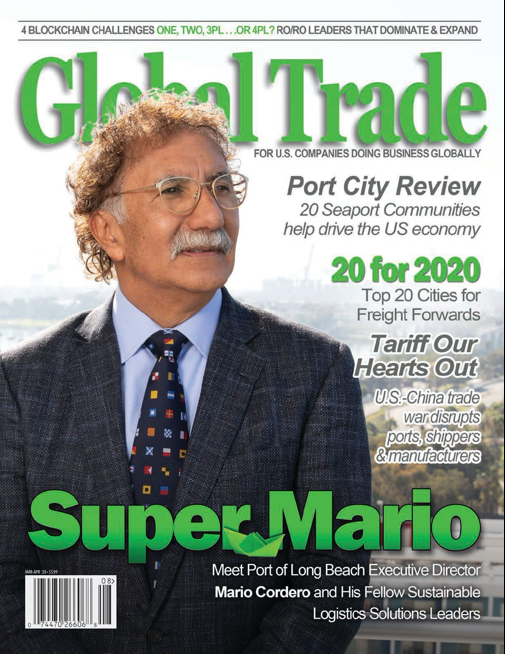 Global Trade is the authority for U.S. companies doing business globally. The bi-monthly magazine is America’s leading logistics magazine and round-the-clock news website focused on domestic and global expansion solutions, education and tools for U.S. manufacturers that export and big box retailers that import. With print and digital distribution of over 127,000 per issue, Global Trade addresses the needs of America’s CEO’s who are responsible for charting their company’s growth and who have the authority to approve them as their logistics partner.

The coronavirus has already killed more than 3,000 people worldwide. Although most cases are concentrated in the Chinese city of Wuhan, the virus has left the country and has spread to up to 30 nations. On February 16, 2020, Kristalina Georgieva, managing director of the International Monetary Fund, warned that the growth of the world economy that is currently estimated at 3.3% for this year, could be cut between 0.1% and 0.2% due to the coronavirus.

The optimism at the beginning of the year for Asian markets has blurred in the shadow of the coronavirus epidemic.

In the medium term, so long as the epidemic is contained in the coming weeks, equity markets will probably rise again. This is partly because global growth should benefit from the delayed effect of the decline in fixed income yields and an improvement in the global industrial sector due to significant restitution of stocks.

Furthermore, uncertainty — an important risk aversion factor for investors — receded considerably with the truce in the commercial war and the adoption of an orderly Brexit, as investment firm Imperial Fund recently stated. There is confidence that the budgetary/credit stimuli in developed countries (mainly Europe) may continue with a change of stance of the German Government due to the pressure from recent external events.

China should also contribute its grain of sand. Its percentage of health spending remains much lower than that of developed countries, which will lead the Government to increase social spending and continue adding liquidity to support its economy.

Production chains are also much more interconnected, in a world that is still very globalized despite Donald Trump’s attempts to limit trade.

In the U.S., the favorable forecast of the economy persists despite some inconveniences derived from the potential spread of the disease and its effect in the manufacturing and services sector. The Fed made a mid-cycle adjustment before entering pause mode and there is some uncertainty about a possible increase in protectionism and fiscal regulation.

In essence (for now), there is no reason to panic. But, let’s face it, the market provides for a strengthening of corporate results, an increase in investment in capital goods and a greater willingness of investors to take risks. This is not really the intended scenario. At a minimum, we must protect ourselves against risk of an extended pandemic that affects the economy for a longer period than the planned months.

Does it affect the real estate market?

Yes. Housing is another sector that is affected by the coronavirus. For instance, in the first week of February alone, house sales plummeted 90% year-over-year in the 36 main Chinese cities and most real estate agencies are closed to the public. The price of housing in the country has registered the most moderate growth during the past year and a half.

The real estate industry in the U.S. has had to take its own challenges to keep the market moving as well. The presence of the coronavirus becomes a new hurdle to overcome within luxury real estate in cities like New York, Miami, and San Francisco.

The federal government suspended the entry of foreign citizens who have visited China in the last 14 days in an attempt to stop the spread of the virus, a situation that could affect the housing sector due to the blocking of access by potential investors.

Foreign entrepreneurs often get an idea of ​​their future homes with the offer presented on the internet; however, investors have less incentive to buy real estate if its uncertain he or she can visit the property. Therefore, in the short term, the virus could further reduce luxury sales. Time will tell.